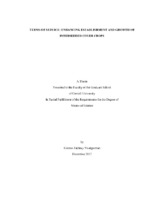 Winter cover crops provide a suite of benefits but their use is limited because there is often not enough time after harvesting crops in the fall to establish cover crops before winter. Problems with establishment may be overcome by interseeding, where cover crops are seeded between rows of cash crops prior to harvest. Interseeded cover crops can provide greater ecosystem services than cover crops established after harvest, including erosion control and weed suppression. In addition to these services, interseeded cover crops might also provide habitat for invertebrate seed predators such as carabid beetles and crickets, which feed on weed seeds. We established a field experiment to investigate how cash crop planting density affects interseeded cover crop performance during the transition to certified organic production. We measured corn density, light transmission through the corn canopy, cover crop and weed biomass, and corn grain yield. We analyzed the relationship between these factors with regression, mixed models, path analysis, and partial correlation. The effect of corn density on interseeded cover crop biomass was significant when quantified both directly and indirectly as mediated by light transmission and weed biomass. At the October sample date, weed biomass was 31% lower in plots with interseeded cover crops than plots without, and corn grain yield was not different between plots with interseeded cover crops and plots without. We also conducted a laboratory experiment to explore the potential for cover crop seeds to be eaten by weed seed predators. Using four common invertebrate weed seed predators and a series of No Choice and Choice feeding assays, we presented seeds of ten cover crop species and three weed species to individual carabid beetles and crickets. We analyzed No Choice preference with logistic regression and Choice with Vanderploeg and Scavia’s electivity index and mixed models. We found that all four invertebrate seed predators consumed cover crop seeds and that preference varied by plant species and insect species. Overall results show that cover crop interseeding can be used to overcome one of the primary barriers to cover crop adoption and provide ecosystem services, but that cover crop seeds are susceptible to seed predation and thus cover crop species selection and seeding method are important to consider.