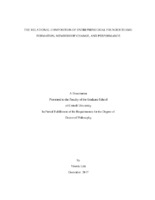 This dissertation examines the relational composition of entrepreneurial teams and its outcomes. The relational composition refers to a venture team’s internal network. The extent to which the team composition depends on one type of social relations rather than another produces different organizational characteristics and bring important implications for its later outcomes. This research particularly focuses on the distinction between family and non-family affiliations and investigates the formation and evolution of such team composition as an input as well as an output. In the first empirical chapter, I examine the role of entrepreneur’s gender in the relational composition of venture businesses by focusing both on who creates a team rather than developing a single-owned enterprise, and on who creates a team with family members rather than non-family members. By analyzing venture businesses in the U.S., I find that females are constrained to establishing solo businesses in comparison to males. Also, when they establish an entrepreneurial team, female entrepreneurs tend to utilize family ties rather than work-related ties compared to their male counterpart. The second empirical study examines how the relational composition of venture teams influences its membership change. In this study, I introduce a new typology of venture teams based on the relational composition: family-only teams, non-family teams, and family/non-family mixed teams. Based on this typology, I find that family-only teams have the most stable structure among the three types with the lowest level of team turnover. On the other hand, non-family teams have the most fluidic form with the highest levels of both member withdrawal and recruitment. Founders in mixed teams are more likely to leave their firms due to internal conflicts between different types of members, and this negative nature of mixed teams hinders a future recruitment of co-founders. Lastly, I shift my focus to the performance aspect of these teams in the final empirical study. Using a competing risks event history modeling, I find that family-only teams show the most successful performance propelled by strong cohesion among team members. On the other hand, mixed teams produce the least successful outcomes due to the faultlines between family and non-family members. All in all, the results reveal the strength of family-only entrepreneurial teams in both maintaining a stable structure and producing a favorable performance outcome, while showing the weakness of mixed teams with a fragile team structure and a negative performance outcome.