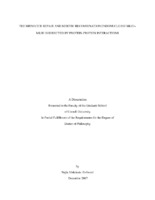 During meiosis, diploid germ cells that will become eggs or sperm undergo a single round of DNA replication followed by two consecutive chromosomal divisions. The segregation of chromosomes at the first meiotic division is dependent in most organisms on at least one genetic exchange, or crossover event, between chromosome homologs. Homologs that do not receive a crossover frequently undergo nondisjunction at the first meiotic division, yielding aneuploid gametes. Such events have been linked to human disease and infertility. Recent studies suggest that the Mlh1-Mlh3 complex is an endonuclease that resolves recombination intermediates into crossovers. Interestingly, this complex also acts as a matchmaker in DNA mismatch repair (MMR) to remove DNA replication errors. How does Mlh1-Mlh3 act in two different processes? I investigated this question by performing a mutational analysis of the baker’s yeast Mlh3 protein. This resulted in a comprehensive structure-function map that illustrates the effects of 60 new mlh3 alleles on both functions. From this map, I identified domains critical for one function but not the other. Five alleles (mlh3-6, -23, -42, -45, and -54) disrupt the MMR function while crossing over remains at nearly wild-type levels. Based on two-hybrid analysis, two of these five alleles (mlh3-42, and -54) disrupt interaction with Mlh1. This information suggests that the weakened Mlh1-mlh3 heterodimer is stabilized during crossing over by other protein factors. Alternatively, a weak defect in Mlh1-Mlh3 interaction may not be a limiting factor for crossover resolution in meiosis. In addition, I identified one allele (mlh3-32) that disrupted crossing over while maintaining nearly wild-type MMR. Mlh1-mlh3 representatives for each class were purified and characterized. Both Mlh1-mlh3-32 (MMR+, crossover-) and Mlh1-mlh3-45 (MMR-, crossover+) displayed wild-type endonuclease activities in vitro. Msh2-Msh3, an MSH complex that acts with Mlh1-Mlh3 in MMR, stimulated the endonuclease activity of Mlh1-mlh3-32 but not Mlh1-mlh3-45, suggesting that Mlh1-mlh3-45 is defective in MSH interactions. Based on these and other observations, my work supports the model that protein-protein interactions with MMR or crossover specific factors are critical in regulating Mlh1-Mlh3’s enzymatic activity. Furthermore, I present five mlh3 mutations (mlh3-39, -40, -57, -58, 59) predicted to disrupt metal binding based on Pms1 structure, which conferred defects in both functions, suggesting the essential endonuclease active site in Mlh3 folds in a manner analogous to Pms1. Finally, whole genome recombination maps were constructed for wild-type and MMR+ crossover-, MMR- crossover+, endonuclease defective and null mlh3 mutants in an S288c/YJM789 hybrid background. Compared to wild-type, all of the mlh3 mutants showed increases in the number of noncrossover events, consistent with recombination intermediates being resolved through alternative recombination pathways. Together, these data illustrate how defective meiotic components can alter the fate of meiotic recombination intermediates, providing new insights into how meiotic recombination pathways are regulated.