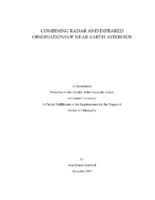 Chapter 1: Near-Earth asteroids are some of Earth's closest neighbors in space. Thousands are known, with dozens of new ones being discovered every week. Yet the physical characterization of near-Earth asteroids lags well behind discovery. Studying some asteroids in detail helps to reveal the properties of the overall population. This work focuses on the detailed characterization of a few specific near-Earth asteroids with high-quality data sets, particularly radar observations that can be used to determine their shapes and rotation states. Incorporating multiple types of observational data enables much better characterization than could be done with any single data set. Chapter 2: For (162421) 2000 ET70, incorporating lightcurves that had not been used for the modeling of Naidu et al. (2013) allows a better determination of its dimensions and rotation state. Incorporating infrared spectra further refines ET70's rotation state, since thermal modeling shows that some pole directions that provide good fits to the radar and lightcurve data are not compatible with the infrared observations. Thermal modeling also indicates that ET70's surface is heterogeneous, since no thermal model with uniform surface properties could provide an adequate fit to all of the infrared spectra. Chapter 3: (85989) 1999 JD6 was observed to have a large amplitude in visible and infrared lightcurves, suggesting that it is a highly elongated body. Radar images obtained during JD6's close approach in 2015 confirm this, revealing a contact binary with a maximum breadth of 3.0 km. Due to fortuitous observing geometry during some of the radar observations, its rotation state can be determined to great accuracy. The direction of JD6's rotation axis is known more accurately than that of any other asteroid for which only Earth-based observations are available. Chapter 4: One promising way to speed up part of the asteroid shape modeling process is by using Bayesian optimization to test pole directions autonomously. This requires less computational time and less human oversight than a traditional grid search.