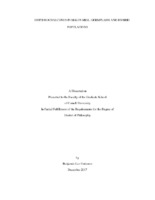 Dihydrochalcones are abundant in Malus Mill. species, including the cultivated apple (M. ×domestica Borkh.). Phloridzin, the primary dihydrochalcone in Malus species, has beneficial nutritional qualities, including antioxidant, anti-cancer, and anti-diabetic properties. As such, phloridzin could be a target for improvement of nutritional quality in new apple cultivars. In addition to phloridzin, a few rare Malus species produce trilobatin or sieboldin in place of phloridzin and hybridization can lead to combinations of phloridzin, trilobatin, or sieboldin in interspecific apple progenies. Trilobatin and sieboldin also have unique chemical properties that make them desirable targets for apple breeding, including high antioxidant activity, anti-inflammatory, anti-diabetic properties, and a high sweetness intensity. We studied the variation of phloridzin, sieboldin, and trilobatin content in leaves of 377 accessions from the USDA National Plant Germplasm System (NPGS) Malus collection in Geneva, NY over three seasons and identified valuable genetic resources for breeding and researching dihydrochalcones. From these resources, five apple hybrid populations were developed to determine the genetic basis of dihydrochalcone variation. Phloridzin, sieboldin, and trilobatin appear to follow segregation patterns for three independent genes and significant trait-marker associations were identified using genetic data from genotyping-by-sequencing. Dihydrochalcones are at much lower quantities in mature apple fruit compared with vegetative tissues. Within the fruit, phloridzin is more concentrated in the peel than in the flesh. We observed higher phloridzin content in the peel of russet apples compared to the peel of non-russet apples. Russet is a disorder affecting the development of the fruit cuticle, causing a smooth waxy surface to be replaced by a rough, russet colored layer. We compared leaf, and fruit peel and flesh samples from 108 accessions in the USDA-NPGS Malus collection and identified a strong correlation between percent russeting and phloridzin content the fruit peel, especially in sport families with variation for russeting. Though russeting can severely impact commercial value of apple cultivars, russeted fruit have a unique nutritional profile compared to non-russet cultivars.