GENETICS OF PROVITAMIN A AND VITAMIN E LEVELS IN MAIZE GRAIN 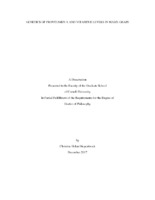 Carotenoids (provitamin A) and tocochromanols (vitamin E) are lipid-soluble isoprenoids with antioxidant and essential nutrient functions in human and animal systems. Vitamin A deficiency and age-related macular degeneration are highly prevalent and result from insufficient dietary intake of certain carotenoids. Improvement of the levels and balance of these nutrients in maize grain through breeding, i.e. biofortification, has been proposed as a cost-effective solution to ameliorate deficiency. To do so requires a more comprehensive dissection of the loci governing natural variation of carotenoid and tocochromanol traits, with high statistical power and mapping resolution, in grain of maize and other major cereal crops. Our group conducted joint linkage-genome wide association studies (JL-GWAS) and RNA-seq expression analyses for these traits in the 5000-line US maize nested association mapping (NAM) population. The majority of identified QTL were found to be underpinned by genes with a priori roles in carotenoid and/or tocochromanol synthesis and retention, including prenyl group synthesis. Surprisingly, two homologs encoding a chlorophyll biosynthetic enzyme explained the majority of variation for saturated tocochromanols (i.e., tocopherols). While maize grain is non-photosynthetic, small levels of chlorophyll were found to be present in embryo, suggestive along with other evidence of a chlorophyll biosynthetic cycle providing phytol for tocopherol synthesis. Overall, more than half of the identified QTL were eQTL, and most also had highly correlated QTL allelic effect estimates across traits, suggesting that pleiotropy within these biosynthetic pathways is largely regulated at the expression level. A number of significant pairwise epistatic interactions were additionally detected, particularly for carotenoids, between identified genes within and outside of the biosynthetic pathway. Finally, our group is analyzing carotenoid and tocochromanol nutritional profiles and agronomic performance of 350 tropically adapted maize hybrids evaluated under combined drought and heat stress in conjunction with the International Maize and Wheat Improvement Center (CIMMYT), Harare, Zimbabwe. In addition to analyzing genetics and genomics within a key target environment for orange, provitamin A-dense (i.e. biofortified) orange maize, candidate lines are being identified and incorporated into the HarvestPlus breeding program to produce nutritious, climate-resilient varieties for the rainfed production areas of southern Africa.