Bioelectrochemical systems - culturing the uncultured: Towards developing a novel community-selection tool to unravel the interaction of hydrogen-producing syntrophs 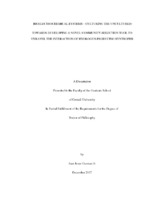 The role of complex and undefined microbiomes in contemporary environment, health, and energy applications is increasingly found to be important. Bioelectrochemical systems (BESs) possess the ability to play a critical role in these applications by interacting with microbiology electrochemically. While most efforts have been aimed at environmental, energy, and chemical production aspects, BESs have demonstrated value as tools for the study of complex microbiomes. Here, I performed work with the goal of developing a BES reactor that could be employed to study hydrogen-gas producing syntrophs to understand their role in critical environments, and further to enrich and isolate syntrophs in pure culture from their microbiome. I first studied poly(3,4-ethylenedioxythiophene) (PEDOT) as a coating for electrodes to increased BES performance in both large-scale systems and BESs aimed for sensing applications. I then modeled and performed experiments to support the model to understand the complex synergistic interactions of microbes using redox-active mediators to interact with BES electrodes. Finally, I modeled and developed a novel BES architecture to enrich and isolate syntrophs from their microbiome so that they can be studied in pure-culture to understand their role in the environment. My results indicate that the BES architecture, which I built and tested based on modeling, was successful at enriching syntrophs, and indicated further steps that can lead to syntroph isolation.