2018 Baker Institute News: Canine flu flaring up, then fading out 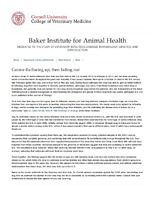 This news item is about: An Asian strain of canine influenza virus that was first seen in the U.S. in early 2015 re-emerged in 2017, and has been spreading widely across the nation throughout the past year. Recently it has caused repeated flare-ups in a number of cities in the U.S. around San Francisco earlier this year, and in New York in May and June. During those outbreaks the virus was able to gain an initial foothold by infecting dogs that came together in kennels, animal shelters, and doggy day cares. From those locations it may infect dogs in households, but generally does not spread for very long among household dogs before the epidemic dies out. Researchers at the Baker Institute provide a detailed background to understanding the emergence and spread of these important new canine pathogens in a new paper published in the Journal of Virology.