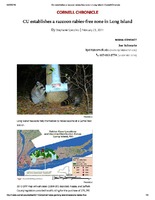 This news item from the Cornell Chronicle is about: As of January this year, rabies in raccoons in Nassau and Suffolk counties on Long Island has been officially eliminated, thanks to a Cornell approach that leveraged on-the-ground and airborne tactics. The Wildlife Oral Rabies Vaccination Program at Cornell, initiated during the mid-1990s, uses a U.S. Department of Agriculture-licensed, safe and effective liquid rabies vaccine hidden inside a small sachet that is coated with fishmeal and fish oil. Raccoons are attracted to the bait by its fishy smell; the animals puncture the baits and ingest the liquid vaccine.