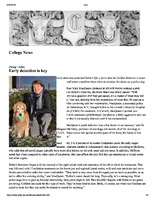 This news item is about: Early detection protected Robin’s life, a favor that the Golden Retriever’s owner hopes he will return countless times when he resumes his duties as a police dog. When Officer Mary MacQueen (pictured at left with Robin) noticed a pink, thick spot on Robin’s lower lip, she knew that it was likely cancer. “With Goldens, it’s not a question of if they get cancer, it’s a matter of when they will get cancer,” she said, drawing from her experiences of more than 30 years as a breeder. After conferring with her veterinarian, MacQueen, a decorated police officer from Salamanca, N.Y., brought Robin to the Cornell University Hospital for Animals (CUHA) for treatment. At Cornell, MacQueen’s partner was diagnosed with cutaneous epitheliotropic lymphoma, a fairly aggressive and rare skin cancer that is not usually detected until it has metastasized.