2009 CVM News: First-ever surgery on cat supported with gifts from Feline Health Center and donors around the world 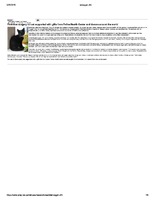 This news item is about: Some say cats have nine lives. If so, Sir Noggin has cashed in several already. In August, he was a stray, rescued from Brooklyn traffic. At first glance, it appeared from a bump on his “noggin” that he had suffered head trauma. An MRI donated by Massachusetts Veterinary Referral Hospital in Massachusetts, however, proved otherwise: He was born with an encephalocele, a condition rarely seen because animals usually die at birth or are euthanized.