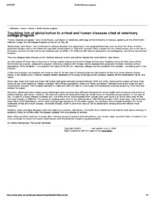 This news item is about: Today, diseases are global, said Corrie Brown, a professor of veterinary pathology at the University of Georgia, speaking at the 2008 Smith-Kilborne Foreign Animal Disease Program at Cornell on May 28. Globalization, said Brown, has contributed to existing diseases now appearing in new geographical areas, such as West Nile virus; to trade-generated disease such as the melamine dog-food contamination of 2006 that involved China, Canada and the United States; and to the rise in previously unknown animal and human diseases such as SARS, HIV-AIDS and BSE (bovine spongiform encephalopathy, also known as mad cow disease).