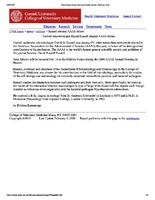 This news item is about: Cornell molecular microbiologist David G. Russell was among 471 other researchers nationwide elected to the American Association for the Advancement of Science (AAAS) this year, in honor of his distinguished contributions to his profession. The AAAS is the world's largest general scientific society and publisher of the journal Science. New fellows will be honored Feb. 16 at the Fellows Forum during the 2008 AAAS Annual Meeting in Boston.