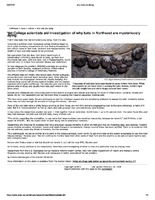 This news item is about: First it was bees that were mysteriously dying. Now it's bats. Bats in hibernation Following a summer when honeybees across America began to die in great numbers, researchers are now finding thousands of sick bats in caves in New York, Vermont and Massachusetts. The deaths of bees and bats appear to be unrelated. Bat specialists from the New York State Department of Conservation (NYSDEC) have found 15 sites, up from four discovered last year, with sick bats: one in Massachusetts, two in Vermont and 12 in New York between Albany and Watertown. To help diagnose the problem, NYSDEC scientists are sending samples to Beth Buckles, assistant professor of biomedical sciences in Cornell's College of Veterinary Medicine.