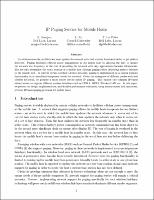 In wireless networks, mobile hosts must update the network with their current location in order to get packets delivered to them. Paging facilitates efficient power management at the mobile host by allowing the host to update the network less frequently at the cost of providing the network with only approximate location information. The network determines the exact location of a mobile host through paging before delivering packets destined to the mobile host. In current circuit-switched wireless networks, paging is implemented as a special purpose functionality in a centralized component inside the network. Given the emergence of different packet-switched wireless networks, we propose a novel router service called IP paging. This enables one common IP-based infrastructure to support different wireless interfaces such as CDMA, GPRS, Wireless LAN, etc. In this paper, we present the design, implementation, and detailed performance evaluation, using measurements and simulation, of three IP-based paging protocols for mobile hosts.