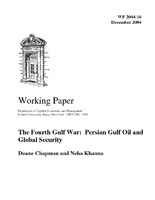 This paper reviews the evolution of the global oil market from the mid 20th century onwards. We analyze the unique “target price” framework brokered by the U.S. and Saudi Arabia in the mid 1980s. Over the 19 years of its life, this framework had been responsible for providing the world with a steady supply of oil at reasonable prices. However, stability in the global oil market was gained at the cost of a lingering political instability in the southern Persian Gulf, an instability that was made apparent with the Iraqi invasions of Iran and Kuwait, and the U.S. war and democratization effort in Iraq. The enormous magnitude of oil wealth in the Persian Gulf region has created a significant problem in terms of international policy and security. We conclude the paper by analyzing three possible roads to the future – laissez faire, an American system, and a multinational security framework.