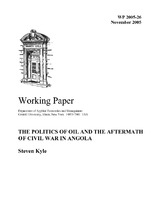 This paper discusses the effects of Angola’s mineral income from oil and diamonds on the major political and economic goal of the present time: national reconciliation and reconstruction in the aftermath of its quarter century long civil war. The paper first touches upon the size of the revenue stream compared to the Angolan economy. Second, it presents some reflections on the role of oil revenue in the internal conflicts in the country, followed by a discussion of the direct and indirect effects of oil revenue on internal politics and foreign policy. A final section looks at these issues in a long run context, discussing the links between oil induced distortions, pre-existing socioeconomic structures and the sectoral distribution of investment.