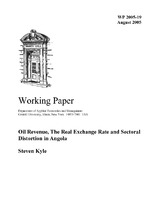 This paper discusses the current status of the Angolan macroeconomy, with a particular focus on the role of oil income both now and in the future. Emphasis is placed on the distortions that can result from large inflows of foreign exchange both in terms of the real exchange rate and also in terms of bias in sectoral growth rates. At the present time Angola is in the second year of a de facto policy of exchange rate based stabilization wherein the government is using large purchases of domestic currency to reduce the excess liquidity generated by deficit spending. This policy of “sterilization” of government spending has resulted in a quasi-fixed exchange rate at a level between 80 and 90 Kwanzas to the US Dollar. While inflation has declined substantially, prices have climbed more than 31% over the past year, a rate approximately half that of 2003. The result has been a sharp real appreciation of the Kwanza and a consequent decline in incentives to produce traded goods. Finding a sustainable way to transition from this expensive policy will be key to a successful rehabilitation and reconstruction of Angola’s war torn economy. By any measure the extent of the appreciation has been large. While it is impossible to assign a precise number to the extent of overvaluation it is possible to compare the current situation with the recent past to give an idea of what the nominal exchange rate would be if depreciation had kept pace with the inflation in consumer prices that has continued unabated over the past years. These calculations suggest that a nominal depreciation of as much as 50% would be needed to restore the real exchange rate to the level of only three to four years ago. There can be little doubt that oil revenue and the real appreciation that it has caused has resulted in serious distortion of the economy even beyond that caused by war. While there have been various theoretical reformulations of the precise channels through which the classical “resource curse” symptom of a stagnating non-oil traded sector can occur, there is general agreement on the observed fact of this outcome. It is worth noting that virtually all channels identified in the literature can, at least potentially, be contributing factors in the Angolan case, including both the classical direct disincentive effects of an appreciated exchange rate, resource pull out of traded sectors toward urban and oil financed sectors, and an inability for non-oil sectors to invest due to high risk premiums caused by high variability in relative prices and hence profitability. Using an index developed to measure the extent of sectoral distortion in oil economies, the extent of this sectoral distortion is evaluated in the Angolan case. The results show that the Angolan economy is among the most severely distorted of any included in previous analyses, including some oil economies in the Persian Gulf.