Stochastic Wealth Dynamics and Risk Management Among A Poor Population 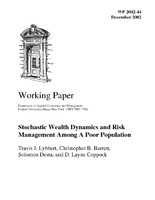 The literature on economic growth and development has focused considerable attention on questions of risk management and the possibility of multiple equilibria associated with poverty traps. We use herd history data collected among pastoralists in southern Ethiopia to study stochastic wealth dynamics among a very poor population. These data yield several novel findings. Although covariate rainfall shocks plainly matter, household-specific factors, including own herd size, account for most observed variability in wealth dynamics. Despite longstanding conventional wisdom about common property grazing lands, we find no statistical support for the tragedy of the commons hypothesis. It appears that past studies may have conflated costly self-insurance with stocking rate externalities. Such self-insurance is important in this setting because weak livestock markets and meager social insurance cause wealth to fluctuate largely in response to biophysical shocks. These shocks move households between multiple dynamic wealth equilibria toward which households converge following nonconvex path dynamics. The lowest equilibrium is consistent with the notion of a poverty trap. These findings have broad implications for the design of development and relief strategies among a poor population extraordinarily vulnerable to climatic shocks.