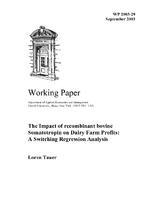 Production and profit impacts from the use of recombinant Bovine Somatotropin (rbST) on dairy farms were estimated using switching regression, with separate regressions for rbST-using farms and non-rbST-using farms. To correct for potential self-selection bias, a probit adoption function was estimated and used to correct the error term in each regression equation. Farmers who use rbST were found to have more formal education and have larger dairy herds, but age was not a significant determining factor in adoption. RbST was estimated to increase milk production per cow even when correcting for the fact that rbST users would have higher milk production per cow without the use of rbST. However, that greater production per cow from rbST use did not translate into an estimated impact on profits per cow.