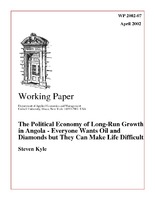 Oil and diamond money are at the same time the biggest economic opportunity for Angola as well as being the biggest economic problem. Angola suffers from an extreme case of “Dutch Disease”, the common name for the constellation of distortions and problems that often plague oil-rich low income countries, and it is tempting to view its prospects for future development solely through this lens. However, the details of the Angolan case are of particular importance since the interaction of oil and diamond money with existing political and regional divisions in the country magnifies the difficulties of resolving either the economic or the political problems that have prevented progress for the past several decades. This paper discusses the ways in which mineral income not only distorts the economy, but reinforces political divides that have existed for centuries. It is argued that a durable solution to Angola’s conflicts requires addressing all of these issues simultaneously since they all contribute to the current problems and line up precisely the same groups in opposition to each other. These “axes of polarization” include coastal vs. interior, rural vs. urban/industrial, Mbundu/mestiço vs. Ovimbundu and MPLA vs. UNITA. This discussion sets the stage for consideration of proposals for a way to overcome these problems and achieve sustained long term growth.