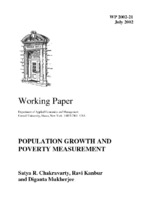 If the absolute number of poor people goes up, but the fraction of people in poverty comes down, has poverty gone up or gone down? The economist’s instinct, framed by population replication axioms that undergird standard measures of poverty, is to say that in this case poverty has gone down. But this goes against the instinct of those who work directly with the poor, for whom the absolute numbers notion makes more sense as they cope with more poor on the streets or in the soup kitchens. This paper attempts to put these two conceptions of poverty into a common framework. Specifically, it presents an axiomatic development of a family of poverty measures without a population replication axiom. This family has an intuitive link to standard measures, but it also allows one or other of “the absolute numbers” or the “fraction in poverty” conception to be given greater weight by the choice of relevant parameters. We hope that this family will prove useful in empirical and policy work where it is important to give both views of poverty—the economist’s and the practitioner’s—their due.