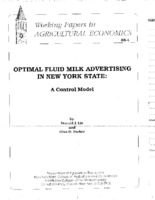 Generic dairy promotion is big business. The 1983 Dairy and Tobacco Adjustment Act requires that all dairy farmers pay a promotion assessment of 15 cents per hundredweight on all milk sold commercially. Of the total assessment, up to 10 cents may be retained locally to fund regional or state dairy product advertising. The funding for national and state programs combined totals over $200 million annually. Thus, the program involves high stakes and, if not well conducted, can result in substantial losses in opportunity costs to dairy farmers. The size of the potential losses emphasizes the importance of understanding the economics of dairy promotion and the need to increase the efficiency of promotional efforts. The purpose of this study is to use a comprehensive optimization framework to identify the optimal time path of advertising expenditures for the New York State fluid milk promotion program. New York State is the third largest milk producing state and the size of its consuming population is second only to the State of California. Currently, New York dairy farmers invest $15 million annually in dairy promotion efforts. The problem is cast in a deterministic optimal control framework with fluid sales equations for major New York cities and the farm milk supply equation for the entire state as the time-evolving equations. The objective is to choose the optimal advertising spending level for each city with the goal of maximizing the discounted net farm revenue stream. The model can be extended to optimization of national advertising expenditures across states or regions. Analytical insights into the solution structure as well as empirical results based on alternative functional specifications are presented in the paper. The empirical results indicate that advertising expenditure levels have been too high in the markets of New York City and Albany, although the spending level for Syracuse is found to be nearly optimal. The magnitude of the overspending, however, depends critically on the functional form chosen. For example, the result for New York City based on a semi-logarithmic specification indicates that the historical spending level is about 4.9 times that of the optimal level while the rate of overspending is 2.5 times when a double-logarithmic model is used. The overspending rate of 2.5 for New York City is consistent with that found in Liu and Forker, which also used a double-logarithmic specification. The analysis also shows that it is optimal to follow a seasonal pattern in allocating advertising funds: advertising should be intensified in the winter and at a lower level during the late spring and early summer. Further, the optimal seasonal pattern found is not sensitive to alternative functional form specifications. A casual examination of the expenditure data indicates that historically the seasonal spending pattern is far from optimal. This study represents the first attempt to deal with commodity dairy promotion in a comprehensive optimization framework while taking into account the complexity of endogenous supply response and government price intervention. The advantage of the current approach over previous ad hoc simulation procedures is that both the short-term seasonal advertising pattern and the long-term; spending time path can be identified in a more realistic setting. While the present model provides a more detailed dynamic of fluid milk sales, farm supply and advertising, it does suffer from some limitations. The optimal solutions are highly dependent on the functional form specified. This is a disturbing result, which confirms the finding of a previous. The dilemma supports Kinnucan1s call for devoting greater attention to theoretical underpinnings of the sales-advertising response relation in order to gain some insight into the appropriate a priori restriction to place on the functional form. The results also point out the need to develop a better and more comprehensive commodity promotion data set as argued by Forker et. al. Such a data set would enable researchers to narrow the choices of functional form empirically through appropriate specification tests. In addition to resolving the functional form problem, the model could be improved to better reflect the characteristics of the dairy market environment. For example, the model does not account for the fact that political goodwill may accrue when advertising efforts increase demand and thereby reduce government expenditures on the dairy support program. In light of the 1985 Food Security Act, which gives the Secretary of Agriculture the power to adjust dairy support prices in response to surplus levels, the potential for political goodwill is of increasing importance to dairy farmers. If the possibility for political goodwill were incorporated, optimal advertising expenditure levels might be higher than those found in this study. To adapt the model to reflect the political economy of the entire dairy industry, researchers would need to specify the behavior of government in setting support prices. With an endogenized government support price which is a function of the dairy surplus, the adapted model should also allow for manufactured dairy product advertising, since the effect of such expenditures would no longer simply be to replace government purchases with private consumption, but rather would result in a farm price impact.