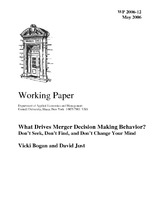 Despite the constant and frequent merger activity across various industries in the U.S. and throughout the world, limited evidence of the success of corporate mergers has been documented. The vast body of academic research demonstrates that most mergers add no value or reduce shareholder value for the acquiring firm. Furthermore, the traditional merger theories have not found significant empirical support. In the past twenty years, more behavioral explanations have been utilized to provide a theoretical basis for merger activity. The “hubris hypothesis” (Roll, 1986) was one of the first non-rational motivations offered to explain corporate merger activity. More recently, overconfidence and optimism have come to the forefront as the most common behavioral explanations for the continued prevalence of ill-advised mergers. This paper suggests that a different type of behavioral bias may also influence merger and acquisition decisions - confirmation bias. Using a unique experimental data set, we provide evidence in support of the existence of confirmation bias in merger decision making behavior.