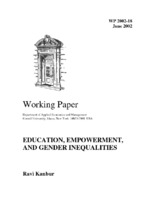 This paper considers a seeming disconnect between the consensus in policy circles that reducing gender inequalities is to be prioritized in strategies for reducing inequality and poverty, and a view in mainstream economics (and in some policy circles) that gender inequalities are overemphasized. This latter view is not stated openly, it being politically incorrect to do so, but is nevertheless present. In specific terms, there is a sense that gender inequalities are not large relative to other types of inequalities, that the evidence on the consequences of gender inequality for economic growth is weak, and that in any event inequality of power is not something that should receive policy priority over conventional economic interventions. This paper takes these positions seriously, and argues that on some readings the narrowly economic evidence does indeed support them, but that to some extent this is an issue with the economic evidence and with its interpretation. A reexamination of the evidence and the arguments suggests a number of directions for research and analysis in exploring the economics of gender inequalities.