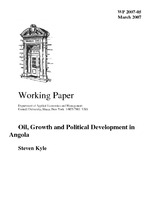 Angola is more dependent on oil than any other country in Sub Saharan Africa and most other countries as well, apart from a handful of OPEC members. Contributing half or more of GDP, oil revenues condition and distort every other macroeconomic variable in the country, a situation that has existed for decades. Appreciation of the real exchange rate is the main macroeconomic distortion resulting from these inflows of mineral income. The paper demonstrates a marked tendency for the Angolan Kwanza to appreciate in recent years, and continuation of this trend is one of the biggest threats to economic rehabilitation of Angola’s war-torn non-oil economy. Resulting economic distortions are quantified using an index of distortion based on Chenery-Syrquin “standard” growth paths of economic structure. Optimal savings and expenditure rates out of mineral income are calculated based on a permanent income approach to optimal expenditure over time. Finally, implications of oil revenue for the future political development of Angola’s main parties are discussed.