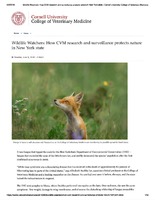 This news item from 'Scopes Spring 2018 is about: It was fungus that tipped the scale for the New York State Department of Environmental Conservation (DEC) —fungus that encircled the nose of the little brown bat, and swiftly decimated the species’ population after the first confirmed occurrence in 2006. “White nose syndrome was a devastating disease that has resulted in the death of approximately 80 percent of hibernating bats in parts of the United States,” says Elizabeth Buckles ’92, associate clinical professor at the College of Veterinary Medicine and a leading researcher on the disease. No one had ever seen it before, she says, and the state lacked the infrastructure to respond.