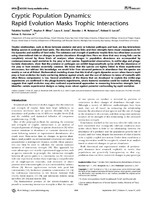 Trophic relationships, such as those between predator and prey or between pathogen and host, are key interactions linking species in ecological food webs. The structure of these links and their strengths have major consequences for the dynamics and stability of food webs. The existence and strength of particular trophic links has often been assessed using observational data on changes in species abundance through time. Here we show that very strong links can be completely missed by these kinds of analyses when changes in population abundance are accompanied by contemporaneous rapid evolution in the prey or host species. Experimental observations, in rotifer-alga and phagebacteria chemostats, show that the predator or pathogen can exhibit large-amplitude cycles while the abundance of the prey or host remains essentially constant. We know that the species are tightly linked in these experimental microcosms, but without this knowledge, we would infer from observed patterns in abundance that the species are weakly or not at all linked. Mathematical modeling shows that this kind of cryptic dynamics occurs when there is rapid prey or host evolution for traits conferring defense against attack, and the cost of defense (in terms of tradeoffs with other fitness components) is low. Several predictions of the theory that we developed to explain the rotifer-alga experiments are confirmed in the phage-bacteria experiments, where bacterial evolution could be tracked. Modeling suggests that rapid evolution may also confound experimental approaches to measuring interaction strength, but it identifies certain experimental designs as being more robust against potential confounding by rapid evolution.