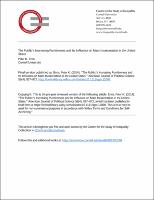 Following more than 30 years of rising incarceration rates, the United States now imprisons a higher proportion of its population than any country in the world. Building on theories of representation and organized interest group behavior, this article argues that an increasingly punitive public has been a primary reason for this prolific expansion. To test this hypothesis, I generate a new over-time measure of the public’s support for being tough on crime. The analysis suggests that, controlling for the crime rate, illegal drug use, inequality, and the party in power, since 1953 public opinion has been a fundamental determinant of changes in the incarceration rate. If the public’s punitiveness had stopped rising in the mid-1970s, the results imply that there would have been approximately 20% fewer incarcerations. Additionally, an analysis of congressional attention to criminal justice issues supports the argument that the public’s attitudes have led, not followed, political elites.