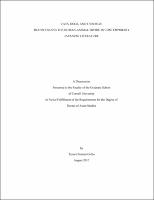 Cats, Dogs, and Cyborgs: Transcending the Human-Animal Divide in Contemporary Japanese Literature blurs the binary between humans and non-humans, as represented in the torrent of relevant literature that has saturated Japan’s popular markets since the archipelago underwent a so-called “pet boom” in the mid-1990s. Through carefully selected texts that look beyond mere representational approaches to the literary animal, each chapter treats specific works of literature as case studies of human-animal relationships gone somehow awry. Examining symbiotic concepts of “humanity” and “animality,” and how each enhances—and undermines—the other across national literary spaces, Cats, Dogs, and Cyborgs makes an unprecedented case for Japan’s pet boom, and how its sudden interest in companion animals points to watershed examples of what I call “productive error,” by which anthropocentrism is redefined as a necessary rupture in, not a bandage on, the thick skin of human primacy. Covering such diverse topics as euthanasia, guide dogs, the supernatural, and posthumanism, this book concludes by introducing the paradigm shift of “postanimalism” as a detour from the current traffic jam of animal-centered philosophies, and in anticipation of a larger project that requires Japan as catalyst, and postanimalism as its theoretical innovation.