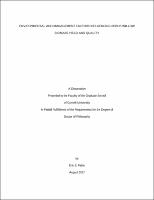 The need for sustainable, renewable energy production is growing as the impacts of human induced climate change are realized. Biomass is an abundant source of fixed carbon that can be converted to useful energy, and dedicated biomass crops such as shrub willow (Salix spp.) are expected to supply substantial amounts of biomass in the future. Shrub willow is a relatively new crop, however, and the genetic resources for improving yield and other biomass traits are only beginning to be explored. The variation in response to environment and management conditions have not been well characterized, especially for newly developed cultivars. The objectives of this research were 1) to identify shrub willow cultivars that display improved yield and biomass quality across two yield trial networks using current statistical methods, 2) to explore the variation in biomass composition among diverse cultivars and quantify the genetic and environmental contributions to variance, and 3) to test for differences in growth and physiological responses to nutrient additions. Using the Additive Main Effects and Multiplicative Interactions (AMMI) analysis, triploid hybrid cultivars were identified as having superior yields over diploid and tetraploid cultivars, and patterns of specific adaptability were identified using the AMMI mega-environment analysis. Subsequent use of mixed model versions of the AMMI analysis and other stability analyses confirmed superior performance in triploids for both older and recently developed cultivars from the US breeding program. Biomass samples from the above yield trial networks were analyzed using High-resolution Thermogravimetric Analysis (Hi-Res TGA) to determine variation in biomass composition. Ash and hemicellulose content were found to be largely under genetic control, whereas cellulose and lignin content and biomass yield were largely controlled by environmental factors. Desirable biomass quality traits were positively correlated with yield, meaning that cultivar selection based on yield may have positive impacts on energy conversion processes. A greenhouse fertilization study showed that the current suite of species and species hybrids that have been developed for biomass production exhibit widely varying responses to nutrient availability, which can be exploited to apply the most appropriate cultivars for a given biomass project. Future research should focus on expanding genotype-by-environment and gene-by-environment analyses more widely to include the vast genetic resources available and on developing nutrient recommendations to better support future shrub willow biomass producers.