The Syntax of Sentential Complementation in Turkish 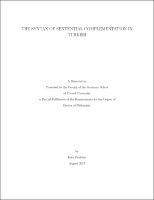 This dissertation examines primarily the syntactic, but also the semantic/ pragmatic behavior of sentential complement clauses in Turkish and proposes a new classification of such complements. A head-final language, Turkish lacks an overt, lexical complementizer akin to English that. The most frequent types of sentential complementation in the language are nominalized clauses; however, it is shown that analyses in which nominalized clauses have a DP-layer above or below them are not tenable. It is argued that both nominalized clauses in Turkish and that-clauses in English have a [+n/- v] feature in C: in Turkish, this nominal feature manifests itself through nominalization, whereas in English this [+n/ -v] feature manifests itself through the demonstrative that, also a nominal expression. Embedded ki-clauses, generally thought of as just another case of subordination, albeit with an ‘Indo-European’ pattern where ki is considered a complementizer, are shown to be paratactic clauses with their own assertoric illocutionary force. The ki element, originally borrowed from Persian, is analyzed here as a coordinator of category C. The puzzling root-clause character of these clauses, as well as their characteristic syntactic/semantic behavior with respect to word order, NPI-licensing, wh-questions, binding, and focusing adverbs are explained by virtue of this paratactic analysis. The peculiar syntactic and semantic/pragmatic properties of clauses traditionally labelled as `fully finite complements’ are shown to be due to their embedded root clause status. These embedded root clauses (ERCs) are also assertions, introducing new information into the discourse. The dissertation further reveals a tight relationship between the position and the interpretation of both DPs and CPs in Turkish. Extending Diesing’s (1992) Mapping Hypothesis to CPs, it is argued that referential arguments—both DPs (accusative marked object NPs) and CPs (nominalized clauses)—are externally merged above the VP, whereas non-referential arguments—both existential DPs (bare object DPs) and assertive CPs (embedded root clauses) are below the VP, in the nuclear scope. Under this new analysis of complementation in Turkish, accusative-marked subjects that may occur in ERCs receive a natural explanation: when presuppositional/referential, the subject of the ERC has to move out of the ERC (i.e. the nuclear scope) into the matrix clause (i.e. the restriction clause), where it receives accusative marking, just like any other presuppositional/referential object in Turkish. This movement of the ERC subject into the matrix clause is shown to be due to reasons of information structure. Thus, contra George and Kornfilt (1981), agreement is not seen as the primary factor of finiteness in Turkish.