The Neural Underpinnings of Projection Bias 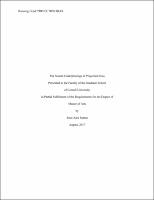 Projection bias, the tendency to inaccurately predict the value of goods to be acquired in the future, is a widely studied phenomenon in behavioral economics but its cognitive and neural mechanisms remain poorly understood. In the present study, we aimed to explore how value changes from prediction of a future episode to the realization of that episode both behaviorally and in the brain. Twenty-five young adults (15 females, 10 males) from Cornell University placed bids on a variety of snack foods while undergoing fMRI scanning across two sessions: one while they were hungry and one while they were satiated. While hungry, participants placed bids according to how much they would want snack items in a future hungry state or in a future satiated state. While satiated, participants placed bids according to how much they would want the items immediately after the end of the experiment. We hypothesized that participants would demonstrate a behavioral projection bias in their bidding behavior that would emerge as a result of state-dependent value judgments. Activity in the ventral striatum was positively correlated while activity in the medial dorsal thalamus and mid/posterior insula was negatively correlated with projection bias. More engagement of regions related to reward processing therefore enhance projection bias while more engagement of regions related to physiological awareness and control attenuate projection bias, suggesting that both reward and control systems in the brain influence prospection about the value of future action.