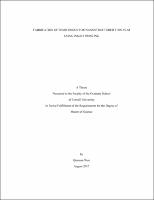 Self-assembly of semiconductor nanocrystals into superlattice has opened up the materials library by design. Driven by the complex interplay between nanocrystal, ligand, solvent and substrate, integration of nanostructures into solid state devices needs to overcome difficulties in preserving surface stability of nanocrystals while maintaining the long range order of the superstructure. Here we demonstrate the fabrication of lead sulfide nanocrystals thin films using inkjet printing. Uniform thin films with monolayer to bilayer thicknesses with periodic arrangement of nanocrystals were obtained. Adding a liquid subphase to initiate the self-assembly at fluid interface increased the ordering range of the superlattice. Further improvements in the printing technique such as the compatibility with low viscosity ink and surface sensitive materials would advance the fabrication of single crystal nanostructured thin film.