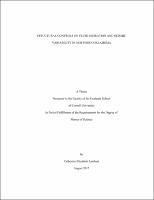 Abundant seismicity in north-central Oklahoma occurs throughout a region containing both mature, high-offset faults, and zones of sparse, short faults. This study uses a new seismicity catalog from 2015-2016 to show that earthquakes are, counterintuitively, most abundant throughout the regions of sparsely-mapped faults, occurring predominantly in basement away from mapped structures. Earthquakes are not detected on large, mapped faults bounding the Nemaha uplift, and earthquakes within the bounds of the uplift occur in rare and discrete clusters near wells. In addition to a catalog of precise earthquake locations, we calculate seismicity migration rates and focal mechanisms. We interpret the variation in seismicity across the uplift as the result of variations in fault density, fracturing, and resulting permeability structure. We suggest that the active seismicity along the edges of the uplift combined with the paucity of earthquakes on and between the large mapped faults indicates that the large faults are likely low permeability baffles for across-fault flow, impeding fluid migration into the uplift. Fault baffles would buffer the interior of the uplift from the regional fluid pressurization thought to cause the temporally expanding zone of seismicity. Within the uplift, in the zone of low seismicity, enhanced fracturing, faulting, and related basement alteration may create efficient fluid pathways that facilitate pressure diffusion away from local wells and modulate the seismicity rate. Supplemental Materials: hypoDD relocated hypocenter catalog and HASH focal mechanism catalog.