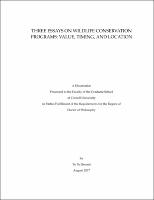 Recovery efforts are critical in saving species by reducing the risk of extinction. The first essay proposes a method of measuring this reduction in risk, which applies a stochastic population model as discussed by Dennis, Munholland and Scott (1991). The value of recovery efforts or a conservation program can be calculated as the expected present value of a species' longer survival. The value can be calculated in two parts. In the first part, the reduction in extinction risk can be measured by the probability difference between the extinction first arrival time before and after a conservation program starts, for all future periods. In the second part, the existence value of an endangered species might be estimated either from stated preference surveys (contingent valuation) or from collective revealed preferences, as measured by the public's actual payments on recovery programs. Considering both the reduction in risk and the existence value of an endangered species gives a monetary measure of the benefits from recovery actions. A numerical example of the California condor is used to illustrate the method for calculating the monetary value of recovery programs. The second essay studies the optimal timing to start a conservation program when a species' population is declining and risks extinction in the future if no actions are taken. Two methods are proposed. In the static approach, the timing depends on hazard rates of extinction of all future periods. Two types of hazard rate functions are explored. One is derived from an extinction first arrival time probability distribution, which is an inverse Gaussian distribution. This probability can be estimated from the historical population size data of a species and by using the same stochastic population model as in the first essay. The other hazard rate function is a Weibull distribution. First order and second order conditions are derived to calculate the optimal timing to start a conservation program. The dynamic approach is a state contingent model, in which the optimal timing depends on the current population level of the species itself. In addition, the California condor and the whooping crane are studied as two examples in this essay to illustrate the calculation method. The use of captive breeding and subsequent release of endangered species is a valuable conservation practice in saving species from extinction. When releasing captively bred endangered species back into the wild, the US conservation agency often requires the establishment of two or three separate wild populations to avoid simultaneous local extinctions. However, when the sizes of separate populations are spatially correlated because of regional stochasticity, the distance between release sites influences the overall setup and management cost as well as the probability of joint extinction. Thus the distance between release sites create a trade-off between the expected loss should extinction occur and the setup and management cost. The third essay examines (1) the relationship between the distance and the probability of joint extinction; (2) the trade-off created by that distance; (3) comparative statics between the optimal distance and the spatial correlation, and between the optimal distance and the setup and management cost; and (4) a comparison between the outcomes of one, two and three release sites. In addition, an example of the California condor is used to discuss the importance of the trade-off created by the distance between multiple conservation sites.