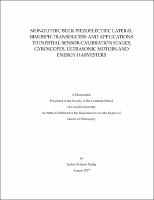 A laser micro-machined bulk-piezoelectric PZT-4 (Lead Zirconate Titanate) based lateral bimorph transducer with differential drive and sense capability is demonstrated. Unlike conventional bimorph designs, the approach here does not require adhesive and/or non-piezoelectric layers. The monolithic fabrication makes arrays of bimorphs suitable for micro-systems integration. The in plane bimorph transducer relies predominantly on the d31 coefﬁcient for transduction. A bimorph transducer with length 6.25mm, width 0.45mm and thickness0.5mm is characterized to demonstrate DC actuation and resonance current to displacement sensitivities of 23nm/V and 1.1µA/µm, respectively. Nonlinear effects in the transducer characteristics owing to nonlinear electrical and mechanical properties of PZT-4H is also investigated. The ratio of voltage amplitudes of the ﬁrst harmonic (2f) to fundamental (f) for drive voltage amplitude V1 is found to be ≈ 1.74×10−5e0.88V1. The sense current noise of transducer is 5nA/√Hz and the sensor tip displacement measurement resolution at resonance is≈0.9nm for small time scales (τ < 10s). A bulk-piezoelectric PZT actuator based ultrasonic motor in which the stator is an array of X-motion PZT bimorphs is demonstrated. X-motion signiﬁes moving diagonally in the XZ plane. The bimorphs have three electrodes that are designed to produce a bimorph tip trajectory consisting of diagonal motion in two orthogonal axes, mimicking’X’, hence the name X-motion planar bimorphs. The X-motion lateral bimorphs apply forces onto the rotor to induce rotation. The PZT bimorphs are fabricated using a laser-micromachining process resulting in monolithically integrated bimorphs to form the stator. Unlike previously reported approaches for ultrasonic motors using piezoelectric bimorphs, the fabrication process used here eliminates the need for manual bonding and selective arrangement of PZT corresponding to different poling orientations. The planar integration of the motor elements helps one to envision many co-located motor elements for multi motor systems. Three combinations of rotors and stators were tested to verify the physical model of the motor, with rotation rates of up to 400−600rpm. One combination of stator and rotor operates with stator resonance of 32.6kHz and can withstand a load of 4.1g for 60Vpeak drive at resonance. One of the stators is used to drive a 3D-printed plastic fan blades that produced maximum air ﬂow rate of 160mm/sec at 60Vpeak drive voltage. A piezoelectric multi-modal mechanical (X,Y,θz) stimuli stage is demonstrated, which is capable of≈ 50ppm precision in-situ calibration of MEMS gyroscopes packaged on the stage. The calibration system is capable of extracting instantaneous scale factor, bias drifts and cross axis sensitivities of MEMS Coriolisforcegyroscopes. The bulk PZT calibration stage is capable of non-resonant sinusoidal angular rates of 0−300deg/s for scale factor and bias measurements and X-Y in-plane acceleration stimulus of 0−90m/s2 to extract the gyroscope in plane acceleration sensitivities at 100Vp,0−250Hz drive voltage, and frequencies. The stage has < 5ppm/V undesirable out-of-plane motion while actuating in-plane for applying desired mechanical stimuli for calibration of the gyroscope. The calibration system consumes ≈ 400mWatts when the gyroscope is in operation at baseband while the gyroscope is calibrated at higher frequencies. To achieve a long term stable calibration stage, an optical metrology system is used to calibrate the motion stage. The optical metrology system can ensure 10ppm stable stage metrology, to enable long term stable gyroscope calibration. The optical system uses an atomically stable laser source and a CMOS imager that can be potentially integrated into the same package as the calibration system, for closed loop control of the calibration stage. A piezoelectric bulk-PZT Z-axis Coriolis force gyroscope is demonstrated, which utilizes spring-mass resonances of the in-plane PZT bimorphs and a PZT proof-mass. The design exploits the large piezoelectric coefﬁcients and high mass density of bulk-PZT to obtain a sensitivity of 1.7µV/deg/s, for10Vpeak drive under mode-mismatched operation and quality factor(Q) of 100−150. The gyroscope is capable of high dynamic range owing to the elimination of micro-gaps that are associated with electrostatic gyroscopes. Nonlinearity in the elasticity properties and piezoelectric coupling in PZT is leveraged for frequency and quadrature tuning, with a DC voltage, applied to control electrodes for a potential closed loop operation. Resonance and quadrature tuning of 10ppm/Vdc and 20deg/sec/Vdc respectively were achieved using nonlinear operation of PZT drive and sense resonators at 10Vpeak drive at a resonance frequency of 108kHz drive. The gyroscope is monolithically integrated within a PZT calibration stage to enable in-situ gyroscope self-calibration. The monolithic device also improved the Q of the gyroscope by a factor of 10 leading to the improvement in sensitivity to 3.4mV/deg/sec at 1Vpeak drive. A 2-axis (X −Y) piezoelectric energy harvester is reported, whose sensitive axis in-plane is rotationally invariant, a result achieved by spiral in-place bimorph, which can be modeled as a cascade of lateral bimorphs. This is different than conventional piezoelectric energy harvesters that are sensitive only along one axis or can realize multi-axis sensitivity through package level assembly of multiple devices at different orientations. Rotational invariance of the sensitive axis is useful when deployed in applications where the device orientation with respect to the vibration is stochastic in nature. At 1g applied acceleration, the vibration energy harvester generates maximum differential voltages of±6.8Vpp across a 1MΩ load, at a resonance frequency of 163.5Hz. The energy harvester has a Q-factor of 129.5 and electromechanical coupling coefﬁcient kt of > 15% for the fundamental lateral mode and a peak normalized output power density of 0.89µWatt/mm3g−2.