Impacts of Age and Exercise on Subendothelial Matrix Mechanics 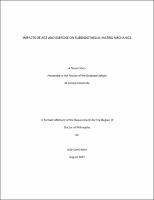 The artery is a complex tissue composed of multiple layers, the mechanical properties of which can influence disease development. The inner-most layer, the intima, is comprised of a monolayer of endothelial cells which reside on the subendothelial matrix tissue. Cholesterol permeation past the endothelial cell monolayer and into the vessel wall is an initiating step of atherosclerosis, the build-up of plaque in arteries. Cardiovascular disease is a major cause of death worldwide, and its risk factors, including increased age, poor diet, and sedentary lifestyle, cause arterial stiffening. While most studies focus on bulk arterial stiffening caused by these risk factors, here, we focused on changes in the micro-scale subendothelial matrix. As a consequence of substrate stiffening, endothelial cell-cell junctions begin to separate, a key step in vessel permeation. In this thesis work, we sought to understand the cardiovascular risk factors that alter subendothelial matrix mechanics and the effects of these mechanical cues on endothelial cells. In the first study of this thesis work, an in vitro model was used to analyze the dual effects of substrate stiffness and physiological shear flow on endothelial cells. We determined that these factors in concert effect RhoA activity and nitric oxide production, important factors to proper cardiovascular health. In the subsequent in vivo experiments, we found that the subendothelial matrix stiffens heterogeneously with age, and this effect can be reversed with an exercise regimen. We also demonstrated that consistent exercise is important in the maintenance of proper cardiovascular health through the mitigation of age-induced micro-scale stiffening. Exercise also provided an ameliorating effect on micro-scale stiffening caused by Western diet consumption, but did not decrease bulk stiffening to the same extent. Finally, an in silico model of endothelial cells on heterogeneous substrates demonstrated that increased substrate stiffness heterogeneities, as are found in aged arteries, produced more heterogeneous endothelial cell basal strains upon applied substrate stretch and fluid shear stress. Overall, this thesis demonstrates that major cardiovascular risk factors such as advanced age, sedentary lifestyle, and poor diet influence the micro-scale mechanics of the artery intima, and we demonstrate impacts of these mechanical changes on endothelial cells. We propose that future studies seeking to combat atherogenesis may benefit from targeting subendothelial matrix stiffening.