The Bald Eagle and the Garuda: A History of American Encounters with the East Indies in the 18th and 19th Centuries 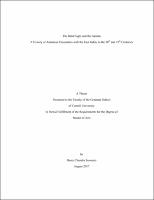 This paper traces the history of the pepper trade between Salem, Massachusetts, and the island of Sumatra. It attempts to fill the gap in historical knowledge of America’s early relations with Southeast Asia prior to its colonization of the Philippines in 1899, and covers the period from 1799 to 1846. The paper also discusses the implications that trade with Southeast Asian polities had on American foreign policy in the early period. The paper argues as well that American merchants’ arrival in the East Indies represented the weakening of the Dutch East India Company’s monopoly on the spice trade in Southeast Asia, which eventually ended in the company’s bankruptcy, the takeover of the East Indies colony by the Dutch crown, and a permanent change in Dutch policy that emphasized territorial conquest as a means of securing Dutch control over the archipelago.