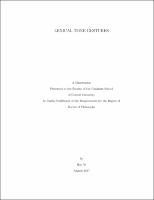 This dissertation investigates the lexical f0 control in Mandarin within the framework of Articulatory Phonology (AP) in two experiments: an imitation study (Experiment 1) and an Electromagnetic Articulography production study (Experiment 2). Empirical results are accounted for by making reference to a gestural model of f0 control within the AP framework. The main goal of Experiment 1 is to investigate the speaker control of relative timing between lexical tones and segments in Mandarin. Past research has shown that there exist consistent patterns of relative timing between f0 turning points and acoustic landmarks. It is unknown how the relative timing patterns are controlled by native speakers, and to what extent the control over relative timing is influenced by perceptual or motoric categories. During the experiment, participants imitated synthesized stimuli with parametrically varied turning point timing and fundamental frequency. By probing into the imitation patterns, it is found that the tone-to-segment alignment is strongly influenced by Mandarin lexical tone categories. It is argued that the relative timing patterns are governed by categorical modes of gestural coordination between lexical tone gestures and oral articulatory gestures. The advantages of the gestural account over the traditional auto-segmental account are further discussed. Experiment 2 investigates the interaction between lexical tones and sentence-level intonation. Previous research has treated this issue an acoustic one, but few studies have made articulatory arguments about the tone-intonation interaction. Using both kinematic and acoustic data, it is found that the intra-syllabic relative timing patterns of gestures are altered by the presence of intonational events such as boundary tones and prosodic focus, which favors the idea that intonational tones interact with lexical tones locally, rather than imposing a global f0 contour. It is proposed that boundary tone (BT) gestures and pitch accent (μ) gestures, respectively triggered by boundary tones and focus-introduced pitch accents, interfere with the intra-syllabic gestural coordination by way of coupling strength, thereby altering the relative timing patterns. The articulatory evidence thus provides an alternative perspective to the extensively debated issue.