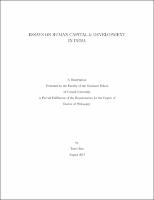 This dissertation consists of three independent research papers, tied under a broad research agenda of "human capital" in India. Chapters 1 and 2 are closely related and both utilize a self-collected, primary dataset on the subjective beliefs, of a sample of 12th grade students, regarding factors that may influence their decision to invest in post-secondary education. Chapter 3 examines a different dimension of human capital and investigates the role of agriculture in improving the nutritional status of rural, Indian women. In the first paper, I examine the inaccuracy of students' beliefs regarding the labor market returns (i.e. wage earnings) associated with post-secondary (college) education. Towards this end, I randomize information on measured population wages to a sample of 12th grade students, drawn from schools affiliated with a large public state university in India, who at the time were roughly six months away from making a decision regarding college attendance and college track (technical, academic, vocational) conditional on attendance. I find that, at baseline, students beliefs about population earnings deviate substantially from true earnings in the population. Upon the receipt of potentially new information, students revise beliefs regarding own-wages in the direction of the information, though the average extent of updating is small and masks substantial sub-group heterogeneity. Additionally, subsequent changes in enrollment intentions and intentions to borrow for higher education are in line with both the extent and direction of wage belief updating. A portion of the heterogeneity in wage belief updating can be explained by initial misperceptions regarding population earnings, and baseline relevance of earnings to enrollment intentions. Yet a large portion remains unexplained, consistent with wide heterogeneity in updating heuristics, at the individual level. From a policy standpoint, these findings point to the limited capacity of information campaigns based on population-level aggregates to induce, on average, large changes in individual priors and help to rationalize a number of recent papers that find heterogeneous impacts of information provision on education outcomes. In my second paper, I draw descriptive insights about the extent and implications of the same sample of 12th grade students' misperceptions about post-secondary (college) expenses, elicited 5-9 months prior to them completing high school. Students' subjective beliefs about post-secondary expenses are compared to a reference distribution of actual expenses incurred by students of post-secondary education. Students overestimate expenses for two out of three tracks. I estimate that if students perceived expenses more accurately, then their perceived affordability for technical tracks and general tracks would increase by 10 percentage points and 55 percentage points, respectively. Students' have relatively more accurate beliefs about the expenses associated with their utility maximizing track or their most preferred track, which I estimate using a flexible model of track-choice. Nevertheless, I show that purging cost beliefs of errors, also increases the perceived affordability of students' preferred tracks by an economically and statistically large magnitude. My third paper is co-authored with Dr. Prabhu Pingali. In this paper, we establish a statistically important relationship between household agricultural income and maternal BMI using a five-year panel dataset of agricultural households drawn from 18 villages across five Indian states. Using within household variation over time, we estimate both, the extent to which short-term changes in agricultural income are associated with short-term changes in BMI, and the effect of agricultural income growth on BMI growth over a longer term. Over the longer term, and for the group of households that regularly farm, we find a 10 pp. agriculture income growth to be associated with a 0.15 pp. growth in BMI. Consistent with the literature, this effect is economically modest, but important considering that we do not nd a corresponding effect for growth in non-agricultural income. We present evidence to suggest that the own-production of food is not an important pathway for nutritional improvements, but the agricultural income effect is likely operational through purchase of food, specifically of protein rich pulses. Effects of agricultural income are stronger for younger women, in the age-group 15-25 years, who face a particularly strong nutritional disadvantage in India.

Except where otherwise noted, this item's license is described as Attribution-NoDerivatives 2.0 Generic