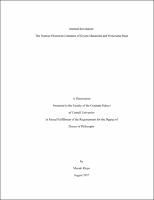 This thesis discusses the concept of internality in the postwar Okinawan literature of Kiyota Masanobu and Medoruma Shun. Whereas traditional approaches to Okinawan studies presuppose an external power such as sovereignty, this thesis examines the attempt to foreground an internal power within the self so as to unmoor Okinawa from the traps of sovereignty. It does this by first examining writings of the philosopher who first conceptualized the “multitude” as a form of communality that is not organized by sovereign power, that is Baruch Spinoza. With Spinoza’s concept of conatus, the first part of this thesis provides close readings of Kiyota Masanobu’s idea of a primordial “hunger,” affirmative recuperation of “defeat,” the dream of a “we” (bokura), and the repetition of “repatriation and escape” to a commune. The second part addresses the literature of Medoruma Shun through Michael Hardt and Antonio Negri’s concept of constituent power, Walter Benjamin’s “Critique of Violence,” and most importantly, Frantz Fanon’s development of interiority amidst colonial struggle. Through this theoretical framework, it provides close readings of violence and sexuality in Medoruma’s “Hope” and Rainbow Bird.