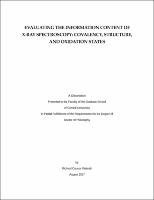 X-ray spectroscopic methods were employed to study the electronic structure of transition metal complexes, toward rationalizing their reactivity or lack thereof. Information about the metal center and the bound ligands was obtained by X-ray absorption spectroscopy (XAS) and X-ray emission spectroscopy (XES). Valence to core XES (V2C-XES) was vetted as a method for characterizing unknown coordination spheres. It was determined that V2C-XES can accurately identify bound ligands, but requires prior complementary knowledge of the system. XAS metal-to-ligand charge transfer (XAS-MLCT) features were thoroughly investigated by single crystal polarized XAS (SCP-XAS) and resonant inelastic X-ray scattering (RIXS). SCP-XAS revealed the source of intensity in XAS-MLCT may be from either d or p orbital mixing. RIXS studies of Cu1+ and Cu2+ species showed that electrons in these ligand based orbitals do not undergo exchange with core level orbitals, but may undergo exchange with metal d orbitals. XAS-MLCT features were used to characterize the resting state of a Cu based catalyst active for selective primary alcohol oxidation. The oxidation requires N-methyl imidazole (NMI), 2,2ʹ-bypiridine (bpy), and (2,2ʹ,6,6ʹ-tetramethylpiperidin-1-yl)oxyl (TEMPO). The role of the NMI was determined as a ligand necessary to form a coordinatively unsaturated Cu species active for catalysis. The electronic interaction between TEMPO and Cu was studied through thorough electronic characterization of a series of Cu/TEMPO and Cu/ABNO (ABNO = 9-azabicyclo[3.3.1]nonane N-oxyl) complexes. The covalent nature of this interaction is implicated as the mechanism by which Cu is allowed to affect a 2 electron oxidation. A Co based oxidation catalyst was investigated by XAS and ab initio computational methods. The ligand was found to behave in a non-innocent fashion, allowing the Co center to achieve turnover in oxygen based catalysis without entering an inert Co3+ state. Finally, the electronic structure of the controversial anion [Cu(CF3)4]1- was investigated though RIXS and XAS. It was found to have an inverted ligand field, and to be a physically d10, Cu1+ species despite its formal assignment of Cu3+. This assignment helped explain both its physical appearance as well as its general lack of reactivity.