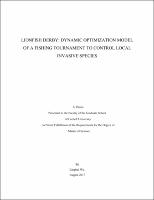 Invasive species have caused significant environmental and economic damage in the United States. Depending on the biology of the invasive species, magnitude of economic damage, and cost of eradication or control, it may be optimal to eliminate (locally extirpate) an invasive species or to limit the population to levels that reduce the economic damage from what it would have been without control. This thesis examines the role that economic incentives might play in controlling an invasive species; specifically, a fishing derby that awards prize money to individuals who remove (harvest) the most lionfish (Pterois volitans), an invasive species now widespread in the Atlantic Ocean, Caribbean Sea, and Gulf of Mexico. The thesis presents a bioeconomic model to simulate the lion- fish population when a derby is held if the estimated lionfish population exceeds a management threshold and when optimal prize money is awarded. The model is calibrated to derbies that have been held off Key Largo, Florida. Lionfish derbies require participants to register as members of a team. The team may then use spears or nets to harvest lionfish from coral reefs in a specified (derby-competition) area. Greater prize money will make the derby more ex- pensive to conduct but, in theory, should attract more teams and increase the aggregate level of harvest by those teams that participate but do not win prize money. The data in this thesis come from two sources: (1) biological research on the ex-ante and ex-post lionfish density in the derby (competition) area, and (2) the aggregate harvest and prize money awarded to the teams achieving the greatest harvested biomass. Simulation and optimization results indicate that derbies can significantly reduce lionfish biomass in a derby area when the population level that triggers a derby is above the steady-state lionfish population if the derby were held every year. However, when the population level that triggers a derby is below the steady-state population when derbies are held every year, lionfish biomass will increase back toward an environmental carrying capacity (the maximum population with no harvest). Optimal prize money, economic damage done by lionfish, and the steady-state lionfish populations are all highly sensitive to carrying capacity. An increase in carrying capacity increases optimal prize money, steady-state lionfish population, and economic damage. Optimal prize money and the economic damage from lionfish are less sensitive to the rate of discount. An increase in the damage parameter, reflecting the marginal damage from lionfish, causes an increase in the optimal prize money and lionfish damage, but reduces the optimal steady-state biomass.