THE ROLE OF REINTERPRETATION IN THE REVISION OF IMPLICIT IMPRESSIONS 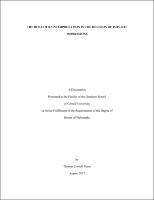 Much research and theory has suggested that implicit (versus explicit) impressions of other people may be particularly difficult to reverse once formed, as they may be relatively insulated from propositional thinking. Furthermore, the revision of negative first implicit impressions has been considered particularly difficult to achieve, due to the dominance of negative information in impression formation. I demonstrate across multiple lines of work that negative implicit impressions can be updated when new information provides a reinterpretation of the basis of the initial negative impression, overturning the negative construal of earlier learning. In a first set of studies (1a-6), people who formed a negative implicit first impression of a new person based on seemingly bad behavior – breaking into and damaging the homes of his neighbors – significantly reversed their implicit impressions after learning that he was actually saving children trapped in a fire. The studies isolate reinterpretation as the mechanism of change through comparison to other positive behaviors that do not reinterpret the earlier story and mediation of the effect through self-reported extent of reinterpretation, and show that revision endures days after the initial study session. A second line of work (Studies 7-12) examines revision through reinterpretation under a broader set of conditions and domains, to begin to establish the more general applicability and utility of this mechanism for implicit revision. Studies 7-8 examine the process components of reinterpretation-driven change more closely with the aim of identifying a broader family of strategies for revision. Study 9 assesses whether reinterpretation can still reverse implicit impressions two days after formation of the first impression. Study 10 examines reinterpretation in the domain of public opinion on big-game hunting, while Studies 11 and 12 test the effect of race and gender of the target on the effectiveness of reinterpretation, respectively. A final line of work examines the automaticity features of reinterpretation-driven updating. Additional analyses of the implicit measures reported in earlier sections show distributional features that have not been reported previously in the literature (bimodality), and then aim to establish the robustness of revision effects to potential explicit influences on the implicit measures and elimination of the unusual distributions. Further studies supported the implicit nature of revision, demonstrating a lack of online participant awareness of their implicit responses (Studies 13-14), persistence of revision effects under taxing distraction (Study 15), and replication of implicit updating with heightened warnings to follow task instructions and elimination of the anomalously bimodal distributions (Studies 16-17). Collectively, these three sets of findings demonstrate that negative implicit first impressions can be reversed by a reinterpretation of the information upon which a first impression is based, and that this process may contribute to impression revision in a variety of domains.