Studies on the evolution of morphological traits in ferns, with an emphasis on the family Dipteridaceae. 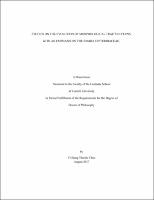 Extant ferns form a diverse, monophyletic group that is sister to the seed plants. Although ferns are rarely the dominant feature of any particular flora, they are found in many of the same habitats that seed plants occupy today. Studying the evolution of characters within this separate line of evolution to the seed plants is thus useful in understanding the variability and distribution of extant plant life. My dissertation comprises of several studies that look into the evolution of morphological traits in ferns, assimilating information and approaches from a variety of fields. By leveraging on publicly available data on species distribution, world climate, phylogenetic relationships and morphology, I conducted a broad-scale comparative study using Pairwise Comparisons on 1515 species of ferns to identify repeated patterns of evolution among all extant ferns with regard to morphology and climate. The next three studies delve into the evolutionary history of Dipteridaceae (Gleicheniales), an early-diverging leptosporangiate fern lineage with an extensive fossil record. By combining information from all extant and extinct members of the family in a single phylogenetic analysis, I uncovered the relationships among the different genera and provide evidence for character evolution within the group. I also present a detailed study on the fossil species Clathropteris meniscioides, describing a particularly rich collection of this species from Patagonia, Argentina, and discussing how evidence from this large collection informs the taxonomy of the genus and contributes to our understanding on the paleoecology of the group. Finally, I present a monograph of the extant genus Dipteris, based on detailed observations of morphology.