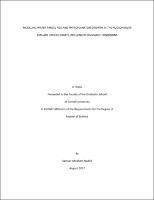 The Hudson River is one of the most nutrient loaded rivers in the United States; however, phytoplankton production is relatively low and major blooms seldom if ever occur, possibly as a result of how quickly water moves though the Hudson River Estuary (HRE). Slower water residence times, which is expected to occur in future decades as a result of lower summer discharge rates, may then allow for significant phytoplankton growth. Light conditions also play a large role in determining phytoplankton growth in the HRE; the photic zone in the estuary is typically within 5 meters, relatively shallow compared to New York Harbor. This study involved using the Regional Ocean Modeling System (ROMS) to simulate idealistic HRE conditions for set discharge rates, in which a simple tracer was implemented to simulate phytoplankton growth and additional tracers were used to simulate age, a proxy for residence time. Growth of marine species was determined based off of salinity, light availability, and time spent within the estuary. In situ light attenuation and suspended matter data from Haverstraw Bay in the HRE was used to create a simple linear model, which is used to predict light attenuation coefficients based on suspended sediment concentration. Model results indicated that while phytoplankton growth increased as discharge rate decreased, extensive phytoplankton blooms were unlikely to occur under any realistic river conditions, as increased mixing and diminishing water column stratification associated with slower discharge rates appeared to counteract the favorability of increased residence times.