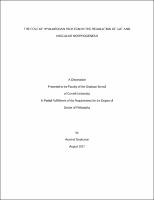 THE ROLE OF HYALURONAN-RICH ECM IN THE REGULATION OF GUT AND VASCULAR MORPHOGENESIS Aravind Sivakumar, Ph.D. Cornell University 2017 During embryonic development, organ morphogenesis is driven by coordination and alignment of local cellular behaviors with the three body axes: dorsal-ventral (DV), anterior-posterior (AP) and left-right (LR) axes. This involves translation and amplification of molecular chirality defined by genetically encoded spatial cues into asymmetric cell behavior that is critical for defining the organ’s form and function. The gastrointestinal tract, displaying profound LR asymmetries, presents itself as a powerful model to study the asymmetric mechanisms involved in the establishment of its stereotypical looping topology and patterning of its vasculature. Asymmetric looping morphogenesis of the gut initiates with a critical leftward tilt directed by the evolutionarily conserved LR pathway. Failure to do so leads to gut malrotation and the catastrophic midgut volvulus, highlighting an urgent need to define the molecular basis of this process. Previous research in mice and birds has shown that the leftward tilt of the gut is established by cellular and extracellular asymmetries across the LR axis of the dorsal mesentery (DM), which suspends the gut tube. The left DM condenses while the right expands causing the DM to tilt the gut tube leftward, and this critical bias determines gut chirality. Concomitantly, vasculogenesis of the gut proceeds within the left DM but is excluded on the right, suggesting that the cellular processes within the DM are also employed to pattern abdominal blood vessels. While the left DM has been shown to be under the control of the left-determining transcription factor Pitx2, the mechanisms that regulate the expansion and vascular exclusion specific to the right DM have remained unknown. Surprisingly, my research demonstrates that the expansion of the right DM precedes all other cell asymmetries that collectively deform this structure, suggesting that the key initiator of asymmetric gut tilting derives from the right side. Hyaluronan (HA), a unique and highly conserved glycosaminoglycan, predominates in the extracellular matrix (ECM) of the right DM. Targeted degradation of HA in the right DM ablates expansion, gut tilting and results in aberrant retention of vasculature in the right DM. This unexpected finding demonstrates that HA is a critical regulator of the ECM expansion and vascular exclusion necessary for asymmetric gut looping and vascular morphogenesis. Investigating into how HA enacts its functions, I show that the tumor necrosis factor alpha-inducible protein 6 (Tsg6/Tnfaip6), an enzyme that covalently modifies HA to form a stable heavy chain (HC) HA complex, is restricted to the right DM. Knockdown of Tsg6 on the right prevents ECM expansion, gut tilting, and disrupts the normal process of vascular exclusion, leading to aberrant gut vascular patterning. Furthermore, misexpression of Tsg6 in the left DM prevents the formation of abdominal blood vessels demonstrating that Tsg6 is both necessary and sufficient to inhibit gut vascular development. The ability of Tsg6 to mediate ECM expansion and vascular exclusion is dependent on its enzymatic ability to covalent modify HA. Further analysis of Tsg6 knockout mice revealed randomized gut looping chirality and gut malrotations in Tsg6 mutant embryos that predispose them volvulus. Collectively, my study identifies a new pathway during LR organogenesis initiated by HA-rich ECM on the right side of the embryo and presents a novel mouse model to understand the origin of gut malrotations and vascular anomalies.