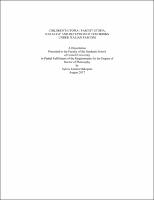 Capitalizing on children’s “extraordinary ability to learn,” Italian Fascist dictator Benito Mussolini decreed an order to issue five elementary school textbooks, known as the Libro unico dello Stato in 1926. Reaching across Italy’s geographic and multicultural barriers, the purpose of this state-issued textbook was to standardize Italian schooling and create a unified body of Fascist subjects. Yet, Fascist Italy’s new curricula proved anything but uniform, as the regime issued two distinct rural and urban editions of the Libro unico between 1929 and 1944 following Mussolini’s decree. Exploring tensions within the regime’s ideas on nationalism in a study that combines literary, theoretical, and historical analyses, my dissertation, Children’s Utopia / Fascist Utopia: Ideology and Reception of Textbooks under Italian Fascism, argues that the Libro unico served purposefully to stratify and not unify Italy’s student body at the primary school. Approaching my study of the regime’s education reforms, pedagogic manuals, and scholastic reading material through an Althusserian framework, my work diverges from the issues which current scholarship has tended to focus on (i.e. militarism, Aryanism, questione meridionale) and in this way offers a new perspective on Fascist cultural history. Examining the rationale behind Fascist policies on elementary school education, I show how Mussolini established an apparatus of textbooks that would shape children into hard-working Fascist devotees. The purpose, as I see it, was one of economic exploitation. Placing students into lower-working classes, these textbooks, in addition to the vocational school system stemming from pedagogue Giovanni Gentile’s 1923 school reforms, did not encourage students to pursue their studies beyond the elementary school level. Rather, they served to mold students into manual workers—farmers and industrialists—who would produce the products and services necessary to maintain the regime’s autarchic policies at a time when Italy was experiencing an economic crisis. But what I uncover through my reading of the textbooks’ stories, poems, and illustrations is the broader implications which this schooling had on class division as well as modern notions of italianità, democracy, and civic duty. Despite its failures, Fascist schooling established a system of stratification that contributes to class division and social inequality to this very day.