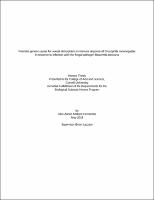 The innate immune response is an organism’s first line of defense against disease, be it bacterial, viral, or fungal infection, and it is an integral part of the evolutionary survival of any species. A well-studied model of innate immunity is the fruit fly Drosophila melanogaster, which has advanced our understanding of many immune signaling pathways that are homologous to mammals. D. melanogaster immune defense responds in a sexually dimorphic manner to infection with various pathogens, including infection with the fungus Beauveria bassiana. Specifically, females die much faster after initial infection compared to males, but the underlying genetic causes responsible are unknown. I examined potential genetic causes of the observed sexual dimorphism by testing for the presence or absence of sexual dimorphism in response to sprayed doses of B. bassiana in various fly strains, with mutations in Toll and IMD signaling pathways. I hypothesized that genes involved in the Toll pathway are responsible for the sexual dimorphism. The results of the experiment showed that mutations in either the Toll or IMD pathways both eliminated the sexual dimorphism. The data suggests that both pathways play important roles in the innate immune response to fungal infection in Drosophila, and that both pathways are required for sexual dimorphism in immune response.